Izmir: The Impressive Pearl of the Aegean Sea

İzmir, also known as Smyrna, is the third-largest city located in the west of the country. The city is one of the most important and must-see places in Turkey because of its historical background and lovely weather. İzmir, which has hosted different cultures throughout history, has been the center of attention of tourists. It is thought that the first settlement in Izmir was established 9000 years ago in Yeşilova.  The cultural history of Izmir has witnessed the civilization of many different peoples, like Hittites, Ionians, Lydians, Persians, Hellenes, Romans, Byzantines, and Ottomans.

Now, we will tell you about the most important sightseeing spots of Izmir, the pearl of the Aegean Sea. If you are ready, let’s take a look at the must-see places of this beautiful historical city!

The Clock Tower, one of the symbols of Izmir, was built in 1901 to celebrate the 25th anniversary of the Ottoman Sultan Abdulhamid II’s ascension to the throne. It is 25 meters high, has four floors and an octagonal plan. The clock of the tower was given as a gift by the German Emperor Wilhelm II. This clock tower is the most elegant of the clock towers of the Ottoman period. So you should definitely visit and take a photo in front of it.

This elevator, built due to the height difference between Mithatpaşa Street and Nihat Bey Street, is one of the most important historical points of Izmir. It was built by Nesim Levi in ​​1907 in order to facilitate transportation. The floors, which are used as cafes and restaurants now, were used as a casino on the ground floor and a cinema on the upper floor during World War I.

The Cord in İzmir Alsancak is the coastline where people sit, have a drink, enjoy the moment and socialize, especially when the weather is nice. Thanks to its beautiful sea view and warm atmosphere, the cord is a place everyone should see. You can take your drink and join the intimate ambient of this place, play fun games with your friends and sing songs or meet strangers. But do not go without seeing the cord, which is one of the important symbols of Izmir.

It is dedicated to Saint Polycarp, one of Saint John’s first disciples, who lived between 69-155 AD. Despite the pressure of the Roman rulers to give up his belief, Polycarp did not give up his belief and was burned to death in the Roman Stadium in Kadifekale on 23 February 155. Another feature that distinguishes the church from other buildings is that it was built on Sultan Süleyman’s order in 1625.

The history of the ancient city of Ephesus, which is located in Selcuk, dates back to 6000 BC. Ephesus was a port city that served as an important bridge between east and west. Therefore, it is one of the biggest trade centers of that period. Ephesus, with its statues, temples and ancient theaters, is at the beginning of places that every local and foreign tourist should see. The magical atmosphere of Ephesus will take you on a time travel and you will be able to discover the ancient Greek period very closely. Also, Ephesus was registered as a world heritage site by UNESCO in 2015.

Cave of the Seven Sleepers

It is the cave where seven young people sleep in the story of the Seven Sleepers mentioned in Christianity and Islam. This cave, which is important for both major religions, is considered as a sacred place to visit. One of the must-see places for tourists who love cultural trips. This cave is located on Mount Pion, near Ephesus.

House of the Virgin Mary

House of the Virgin Mary is a shrine located on the top of the Bulbul Mount. It is said that Mary spent her last days here. After the visit of Pope Paul VI in 1967 to the house, which is considered sacred by Muslims, rituals are held every year on the 15th day of August and these rites attract great attention. You must see this sacred place where natural beauty meets history and religion.

Agora Open-Air Museum is located in the Namazgâh district of İzmir.  Agora means the market place of the city. This place, which is very important in the commercial sense, is also of great historical importance as it is the place where cultures combine and shop with each other. Its history dates back to the 2nd century AD and is from the Roman period.

Saint Voukolos Church was built by the Greek Orthodox Community in the second half of the 19th century. It takes its name from the first bishop in İzmir, Voukolos. This church, which was abandoned for a long time, was turned into a museum in 1924 at Atatürk’s request. It is one of the most important religious places in İzmir.  At the same time, this historical building where culture and art events are held is worth seeing.

Kızlarağası Inn was built in 1743 by Beşir Ağa. It is the oldest building in Kemeraltı also biggest inn in İzmir. This Inn is unique for its architectural feature, and it was build in the most commercially central place in İzmir. If you want to travel back in time, and buy a wide range of craft products, carpects, leather clothes and stunning souvenirs, you should see this place. You can also take a tea break and enjoy the mystical atmosphere.

Ataturk Museum, also known as Ataturk House was built in 1875 by Takfor Efendi. Ataturk came to this house in 1923 for the first time, for Izmir Economic Congress. On October 13, 1926, the building was purchased by the Izmir Municipality and presented to Ataturk. Ataturk came to İzmir five times between 1930-1934 and stayed in this house every time.

The history of Selçuk dates back to 6000 BC. Selçuk is one of the biggest open-air museums in the world. Selçuk hosts very important historical monuments such as Artemis Temple, Ephesus, and Temple of Hadrian.

In summary, you should definitely see this place.

Sirince (means pretty in Turkish), famous for its wine, is a small and cute town just like its name. Also famous for its old Greek architecture. Şirince, the meeting point of history, wine, and nature, will provide you everything necessary for a peaceful holiday. It is the most suitable holiday destination for wine lovers who want a holiday alone with nature, but also want to visit historical sites.

Like other ancient cities in İzmir, Pitane has great historical importance. The name Pitane means plenty of water. It is believed that this ancient city was founded by female warriors known as Amazons. Çandarlı Castle is also located here, you can visit this important castle if you want. You should definitely discover this place, which dates back to the pre-Hellenic period.

Izmir Bird Paradise is a wonderful place like its name. It will be very good for you to observe birds and enjoy nature in this little paradise. You can observe nearly 50.000 birds here. Bird Paradise is in Çiğli, Izmir’s district.

With its impressive natural beauty, Cesme is a very popular place in Izmir. It’s a small coastal town that everyone must-see. Do not leave this place without enjoying this view where you can see every shade of turquoise.

Urla, a charming town of Izmir, is a very beautiful holiday resort for those who want to spend a holiday in peace. You should wander at least one day in this place that is almost out of fairy tales.

Tire, which is not connected to the sea, attracts tourists thanks to its natural beauty and provides a peaceful holiday. If you like historical and cultural holidays, this place is for you.

Alacati, perhaps the sweetest town in İzmir, is a place that every tourist should visit with its fabulous atmosphere. Almost out of fairy tales, this place has the most pleasant streets to visit. Surrounded by different kinds of flowers, colorful houses and the smell of the sea, this place provides everything you need for a peaceful holiday. 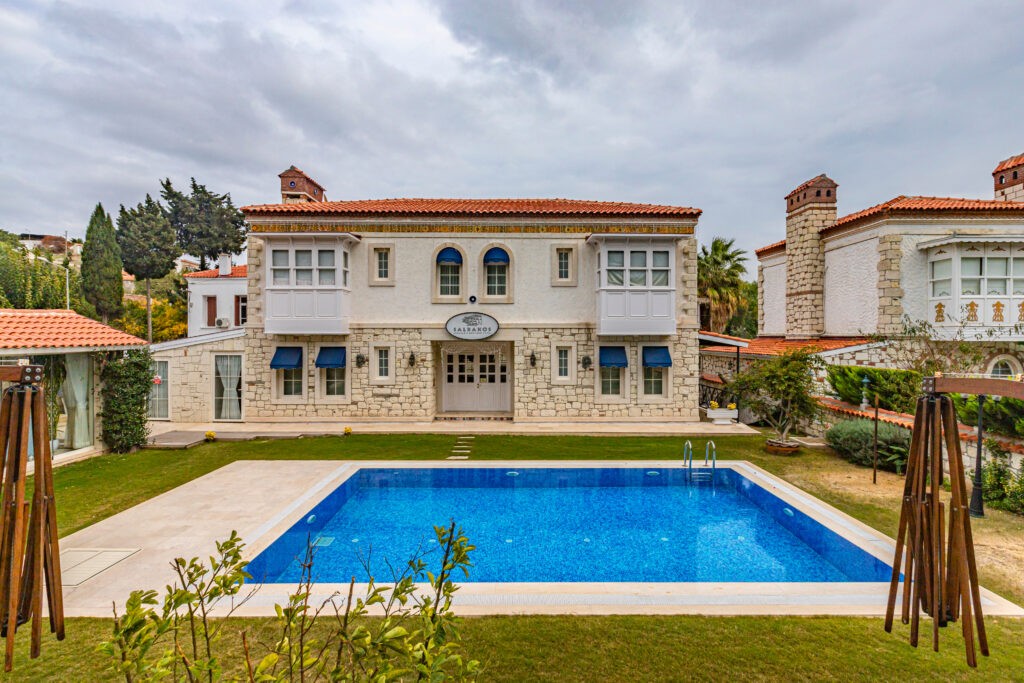 It is the museum where archaeological excavations in the province of İzmir and its surroundings are exhibited. This museum, where the most important works of western Anatolian history are exhibited, is a must-see place for cultural holiday lovers. As you visit this museum, you will remember once again the historical importance of this city.

Bergama, also known as Pergamon was registered as a world heritage site by UNESCO. It is the city where the father of pharmacy Galenos lived. This special place, the center of the kingdom of Pergamon, is also the location of one of the 7 churches mentioned in the Bible. Bergama hosted many civilizations like Hittites, Greeks, Romans, Ottomans… It is a very important place for İzmir tourism, which should definitely be seen by local and foreign tourists who are interested in history.